where it all began (part 1)

Really, the journey of my creative life began years before I actually did any creative work for a living. What took me decades to figure out was that art wasn't just something I enjoyed doing since I was a little girl, Creative is actually the core of who I am. As I look ahead to the changes in my work that are taking me in new directions (really taking me full-circle, back to my roots), I've spent a lot of time looking back at where I have come.

Someone once said nothing is ever wasted. This, I believe, is so true. Here is part 1 of the journey.....


Fear Wakes You Up

In earnest, my creative unfurling began the day I posted my very first words onto my blog back when hardly anyone knew what a blog was. What it gave me was, permission to truly begin exploring myself, my desires and wishes, my creative heart, and what I now recognize as my direct line to spirit. It woke me up... the curiosity, the connection, the fear of hitting 'publish' but doing it anyway, the people I began to meet, and the meaningful inspiration I shared along the way. In the beginning I was looking for like-minded community. In the end, I actually found Myself.


2004 | Under A Pink Sky
After stumbling upon Kerry Smith's, The Wish Jar Journals, I fell heart-first into the shiny new world world of creative blogging. It felt like being Alice, stumbling down the most wondrous and exciting rabbit hole. I met so many wonderful creative friends all over the world, and it was there I began to tentatively share tiny bits of my life as a mom of a one year old, which had also reawakened old creative longings. 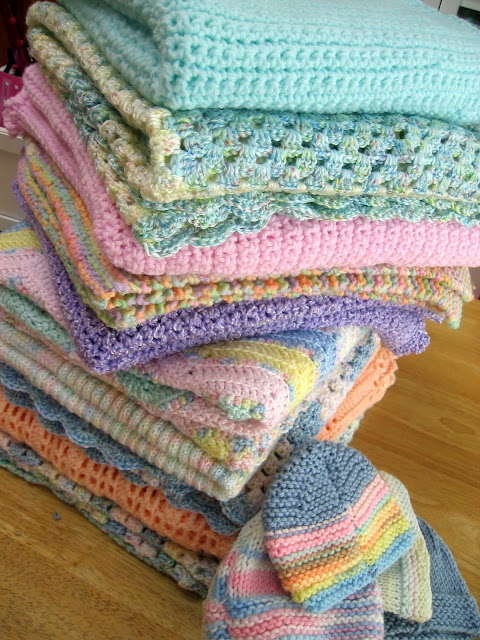 2005 | A Mother's Wish Nonprofit
While I was working full time as a children's clothing designer, I was also working on a side passion project, a nonprofit organization called A Mother's Wish. It was a nonprofit organization I created dedicated to help provide free clothing and other baby and childcare goods, to families in need. At its culmination, I operated a free, donation based boutique in Salem, MA, for clients referred to us through local social service agencies serving underprivileged women and children. Instead of simply receiving random donations, moms could "shop" for whatever they needed, emphasizing autonomy and personal choice when it came meeting their needs. I wanted to make a difference AND do it in a dignified way that created a positive experience of community support. For me it was a crash course in social activism and social entrepreneurship. I finally completed the two year project, serving hundreds of women and children, by merging goods with another local organization, Cradle to Crayons. All of my work previous to my design job (which I loved!), had been in the nonprofit sector and the human service industry. In another life I could have become a Social Worker, but traditional paths were never what worked for me. Ever. Something I still have to remind myself of. 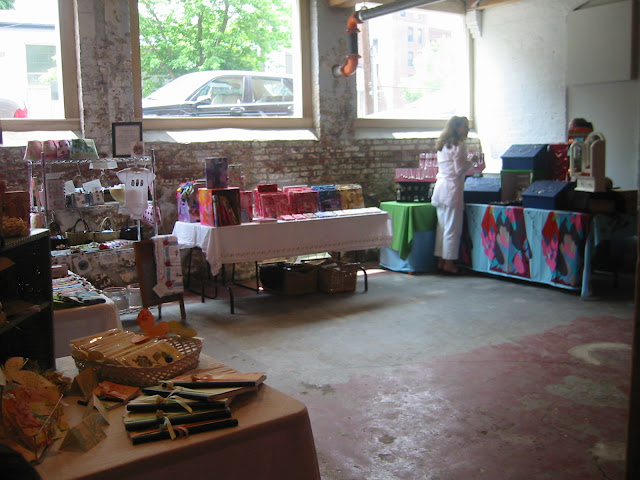 2006 | Wishstudio at Red Brick Arts Center
A Mother's Wish needed a space to process donations and gather support. Alongside this venture was my growing desire for in-person creative community as I continued to blog and explore my own creative passions online. I was slowly meeting new creative people in my own neighborhood, and so an early version of Wishstudio brick and mortar was born. I wasn't completely sure what this space would be used for, as it was long before I was teaching my own art, but it was when I discovered my work as a gatherer and spaceholoer. It was collaborative place where I was able to bring lots of different creative-living offerings together under one roof. We had kundalini yoga classes, gallery shows, art fairs, knitting and creativity circles, Ladies Who Launch meetings, author events, and I remember very clearly wanting to offer henna before ever having experienced it myself -- which finally happened many years later, and now recognize it as an early spark of the embodiment part of my work! The studio was another passionate learning and growth experience that ultimately had to be put on the back burner as we were about to make a move to a new town. 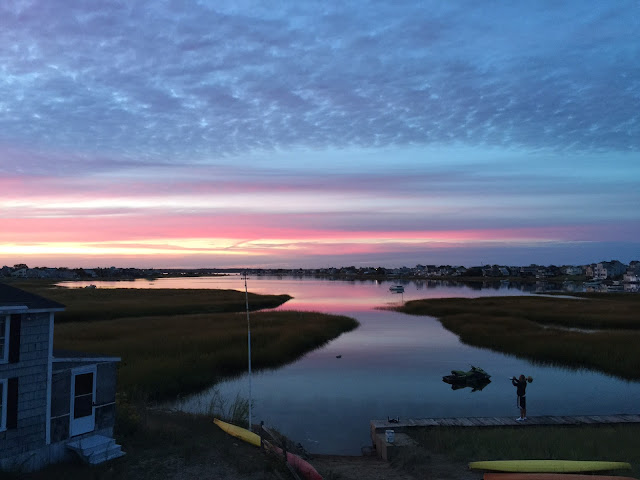 2007 | Hello, Plum Island
This was a time of huge transition and change. Leading up to, and moving to the house on Plum Island in November of this year, was a both a surprise blessing and an enormous challenge. Though we only moved about a half an hour north, there were a lot of big shifts to navigate both as a family and as part of a new community. Ultimately, this sanctuary saved me. Anchored by the ebb and flow of the tide outside my window, my life grew in unexpected ways over the decade we lived there.

2008 - Wishstudio Blogzine
The first home studio was in what would become my yet to be born, second son's bedroom. I remember during this time, as my community was growing, I was really struggling with limiting beliefs about my own creative path. While I was curating a collaborative blog that was growing in popularity and scope, one that I envisioned to be like a fun online magazine (hence the awkward name), I was wondering more and more about what I had to contribute. Much of the creative inspiration I offered was in shining the light on the work of others who inspired me. I was still making and creating, but it would be a while until I really claimed the word Artist for myself in any way. I was still deep in the process of growing my own creative wings. 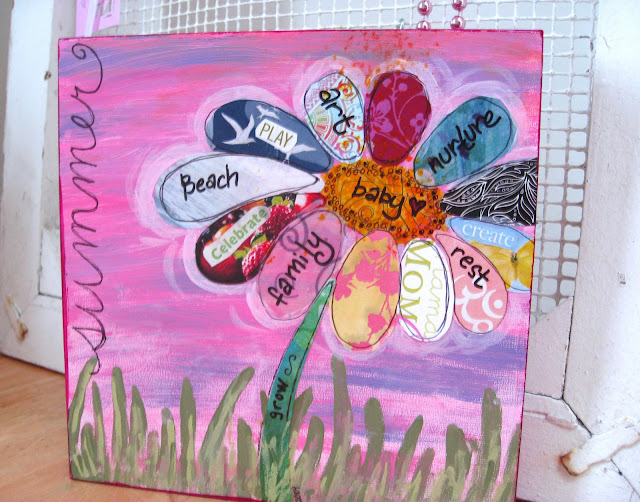 2009 | Motherhood Redux
Some of my biggest creative growth happened in tandem with the arrival of each of my sons. There was something about the generative life-force running through that expanded my capacity and had me gestating big dreams and wishes while growing into motherhood. This played such a huge role in so many of the projects I participated in and the community I was creating during these early years. I was connecting with other creative moms who were trying to juggle their own soul work alongside the role of mother. I was inspired by so many women doing amazing things!

2010 | Wishstudio.com, Wishfull Virtual Art Retreat
This was the year I finally made the leap to trying to take on Wishstudio as an actual job, and Wishstudio.com was born. Up until this year, I had always been thinking about work as something separate from what I was doing creatively, but this was the year I went all in on my own creative dreams. It was also the year I came up with the harebrained idea of an online art retreat - one of the first of it's kind! It felt so big and crazy, that I reached out to someone who I really admired in the online creative world for support, even though I didn't really know her. I'll never forget that conversation and how she believed in me and my idea. She, along with bloggers like Susannah Conway, taught their first online classes during this retreat, which was inspired by my longing to attend Squam, years before I'd make it there. 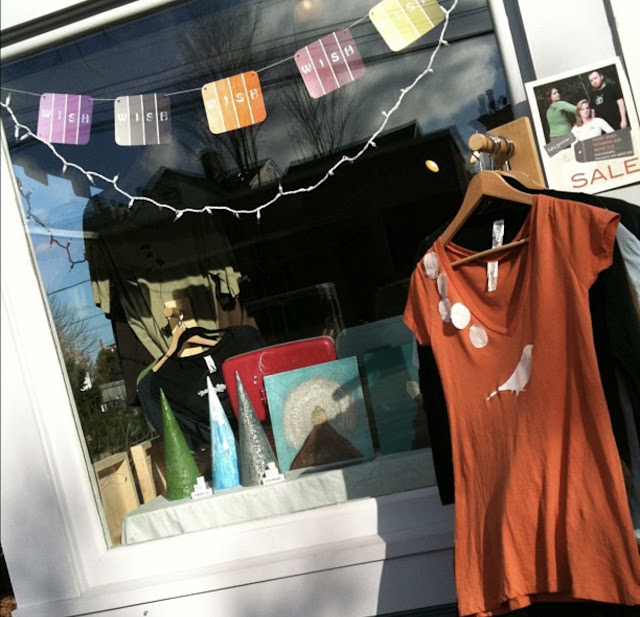 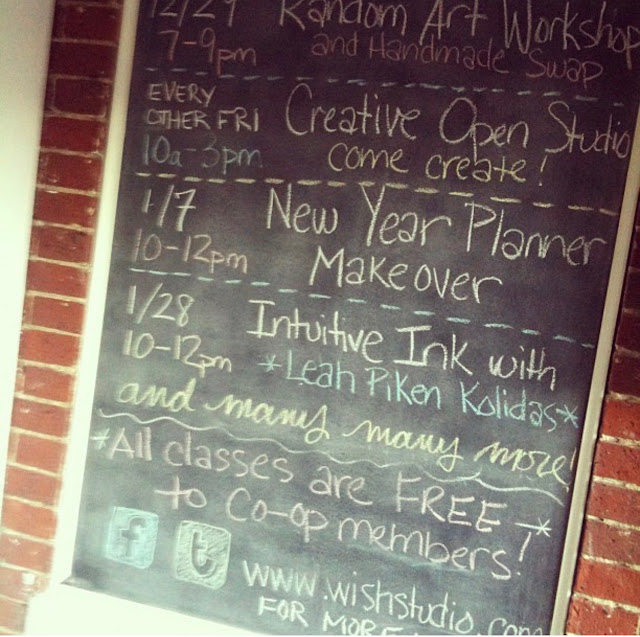 2011 | Wishstudio Co-op
With my online community growing, I felt the tug to gather in person again. This time, I had the vision of a community cooperative, similar to a food co-op where memberships pay for full access, as I was trying to build a creative model that felt accessible and sustainable, because so much of what I wanted to attend or take part in was never financially possible. I wanted to offer a new way of offering more for less... definitely seeds of my non-profit roots. I offered both online and in-person workshops as part of the co-op, as well as artist residencies, gallery and trunk shows, and collaborative opportunities to help other creative women and artists grow their businesses and followings. Inspiring and amplifying others has always been a primary value and love! 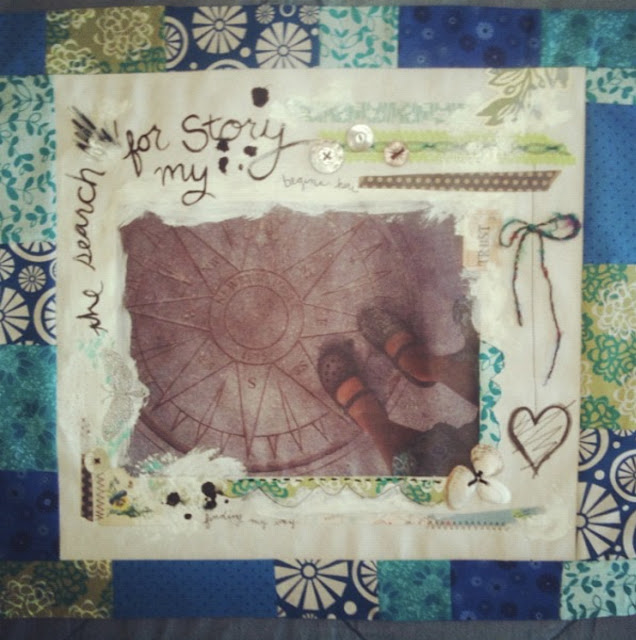 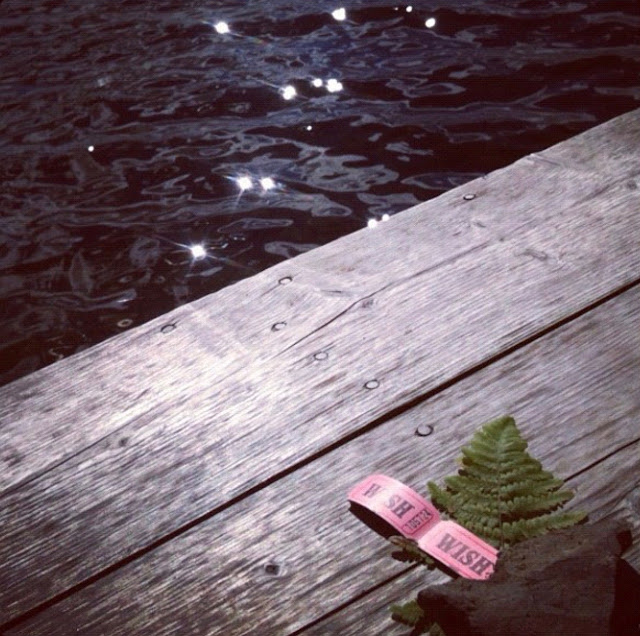 2012 | Squam and Painting
This is the year I started to explore and make my own work. It was the year I'd finally attend Squam (thanks in part to a wish of my cabinmate, who helped magically make it happen!), and where I began to really get more brave with my art and with being seen in general. I painted with Kelly and wrote stories with Jen, and my creative heart and soul grew three sizes that week. I was just beginning to find my true creative voice. 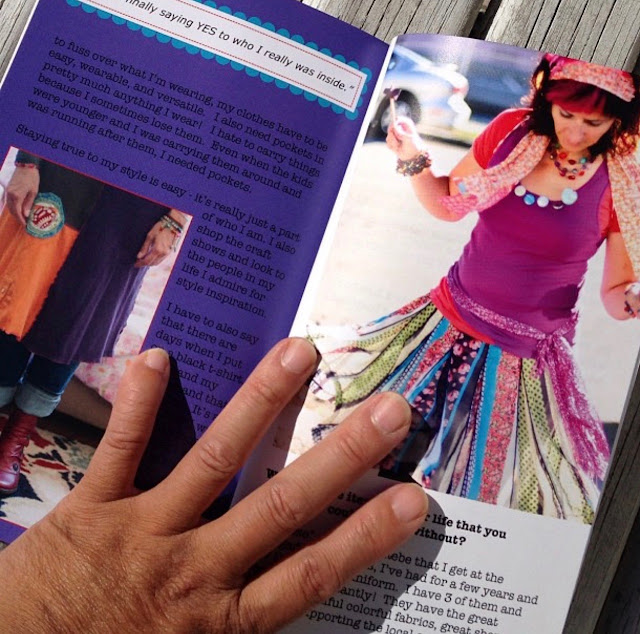 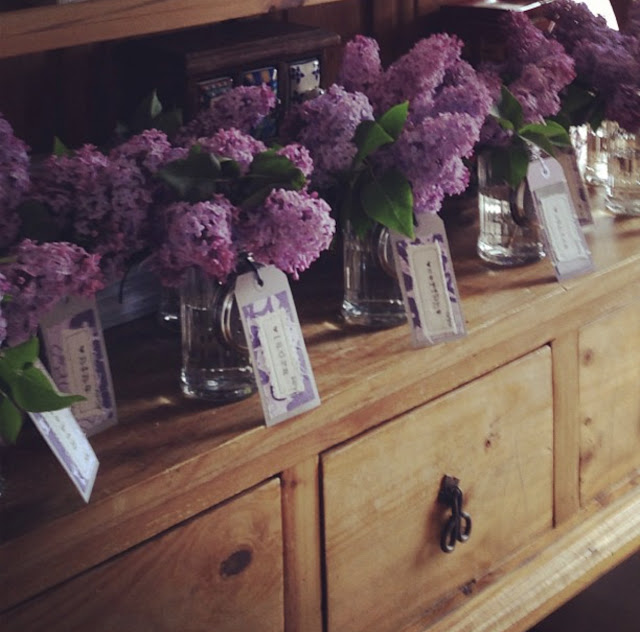 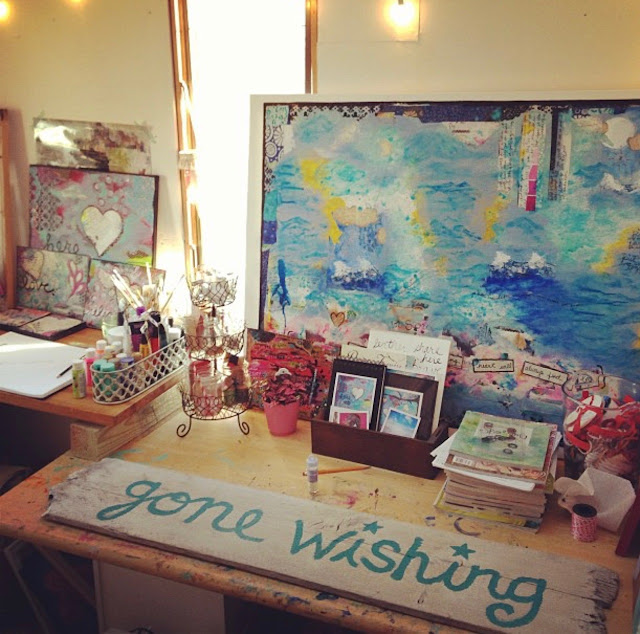 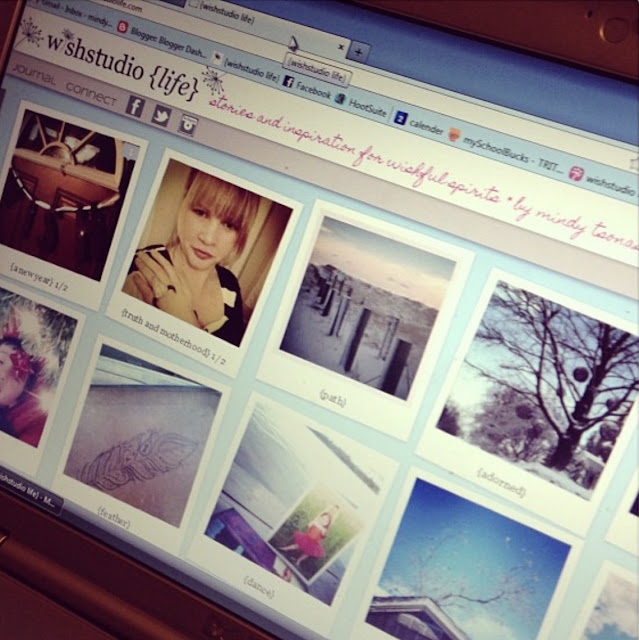 2013 | Wish-Makers Circle, Wishstudio Life, Exploring Your Sexy, G+G, Gone Wishing, First Brunch, Slutcracker
It was a pivotal year. I stepped more fully into important aspects of myself and was beginning to see how all the work I've been doing fit into my identity and how I was showing up in the world. I wasn't just sharing artful inspiration anymore, I was sharing parts of who I was which was creating new and very real connections. I was growing intimacy with my own self by being more vulnerable with my work.

I invited others into my home for the first time since moving to the island (Brunch was born!). I hung my handmade sign that shared my identity as a wish-maker with my neighbors, which at the time felt so huge. I painted a body of work and lived like an Artist. I published a zine. I could feel an enormous tug to start telling more of my story, and changed my website to Wishstudio Life. I started writing about and integrating sex-positivity on my blog, which I had been exploring behind the scenes for several years by then. A post I wrote about the Slutcracker burlesque I was involved with, really blew up, and I started noticing a curious thing happening -- people were reading my posts more than ever (by triple!), but no one was engaging in the conversation. Crickets. Ultimately, I lost almost half my email followers in the process as I went from Artist to Truth Teller, but I felt more in alignment than I'd ever had before, so I kept going knowing people were really listening.

on September 01, 2018
Email ThisBlogThis!Share to TwitterShare to FacebookShare to Pinterest